Midland law firm mfg Solicitors has been ranked as one of the region’s leading law firms for its expertise across a variety of practice areas by the Legal 500, the independent guide to law firms.

The established firm, which has offices in Worcester, Kidderminster, Bromsgrove and in Shropshire, has been graded highly in six legal practice areas. This included a ‘first tier’ ranking for partner Robert Weston’s work in complex contentious trust and probate cases with him described as ‘commercially aware and experienced’.

The firm’s skills in agriculture, commercial litigation, family, employment and commercial property matters have also been praised within the recently published guide with five of the firm’s lawyers singled out for recognition.

Respected rural and farming specialist, partner Iain Morrison, was again listed for his expertise while his colleague, partner Sarah Denney-Richards, was commended for her work advising on wind and hydro schemes across England and Wales.

A further two partners from the firm were also praised in the Legal 500 which, now in its 26th year, is widely acknowledged as the world’s largest legal referral guide.

For the second year-in-a-row commercial litigation partner Tom Esler was labelled as ‘excellent’ with matrimonial expert Claire Backler singled out for her experience with complex matrimonial finance cases.

Maynard Burton, partner and chairman at mfg Solicitors said: “We are delighted to have a new first tier ranking for our expertise in all contentious trust and probate matters. It is fantastic recognition for Robert who has led and co-ordinated a variety of national cases.

“Overall, for several of our specialist solicitors and teams to be praised so highly in 2013 really is the icing on the cake for what has been a successful year.

“The growth steps we have taken during 2013 are widely recognised. We have not only expanded the business, but also added new talent to our teams as we look to spread our reputation wider.

“This latest recognition in Legal 500 gives everyone across the firm another boost as we prepare for 2014.”

The employment and commercial property teams at mfg Solicitors were also recognised in the 2013 independent guide.

More than 250,000 corporate counsel were surveyed and interviewed globally in the past 12 months to put together the 2013 Legal 500 in which firms and lawyers are recommended purely on merit. 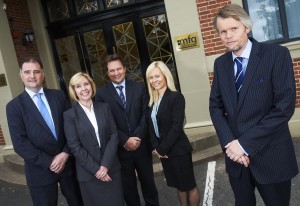