A Midland family law specialist has been chosen to co-present a new Indian television talk show.

The 31-year-old from Hagley, who joined mfg’s family department in 2010, is putting her expertise in children and family law to good use in the show where she is sharing her knowledge and advising the studio audience on a range of family-related subjects such as domestic violence.

Filming for the show, aimed at a younger Sikh and non-Sikh audiences across the UK and Europe, takes place in Hockley, Birmingham at the Akaal Channel studios.

Rupinder said: “It’s a big honour to be part of such an exciting new venture and to be lending advice to the Sikh community. The show covers some big issues that some Sikh families are affected by and the feedback from across the UK so far has been exceptional.

“Being part of one of the largest family law teams in Worcestershire for almost four years has given me some fantastic experience and knowledge which really helps when it comes to fronting such an interesting show. We deal with issues across a diverse number of groups across the region so that certainly helps when dealing with the many issues guests want to discuss.

“Although I haven’t had much TV experience, my confidence is growing with every show that is recorded and I am thoroughly enjoying it. I hope it will go from strength to strength as it gives the Sikh community a huge opportunity to debate issues that often go unacknowledged.”

Claire Backler, partner and head of the family department at mfg Solicitors, added: “To be offered a role to co-present such an exciting new television show is fantastic news for Rupinder and for the whole of the family department here at the firm. She has a very natural presenting style and coupled with the respect she has within the Sikh community, is destined to be a great success.

“As a very diverse team specialising in all manner of family law issues, we have worked a lot with the Sikh community in the past so we also hope that Rupinder’s new role, which she manages in her spare time, will give an even wider profile for the expert services and confidential advice we provide.”

People can tune in to the show on Tuesdays at 9pm on Sky channel 858. Akaal TV launched in September this year.

The family law department at mfg Solicitors has five partners and three associates. They offer their services at mfg’s offices in Kidderminster, Bromsgrove, Quinton, Worcester, Telford and Ludlow. 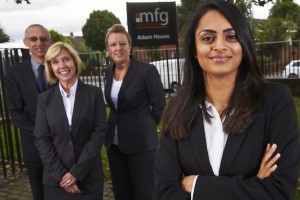